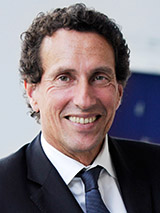 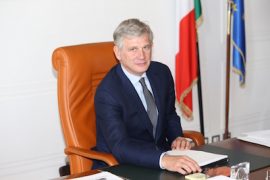 Rossella Bonito Oliva teaches Moral Philosophy and Intercultural Ethics at the “L’Orientale” University in Naples. She has worked on themes connected with subjectivity especially in the field of German Idealism and 20th-century philosophical anthropology. Among her publications Labirinti e costellazioni (Labyrinths and Constellations) (Milan 2008), Soggettività (Subjectivity) (Naples 2003), L’individuo moderno e la nuova comunità (The Modern Individual and the New Community) (Naples 2000), La «magia dello spirito» e il «gioco del concetto» (The “Magic of Spirit” and the “Game of Concept”) (Milan 1995). She edited the Italian edition of L. Bolk, Il problema dell’ominazione (On the Problem of Anthropogenesis) (Roma 2006) and of G. W. F. Hegel, Lezioni sulla filosofia dello spirito (Lectures on the Philosophy of Spirit) (Berlin 1827-28) (Milan 2000). She wrote essays on Bergson, Scheler, Gehlen, Bolk, Dilthey, Canetti, Jaspers, Binswanger, Anders, and Arendt. In recent years, she has worked on issues connected with the relationship between ethics and science, with particular attention to the possible forms and fallouts of the so-called post-human concept. 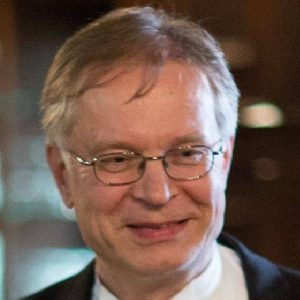 Academy Professor Risto Ilmoniemi received the Ph.D. degree in physics from the Helsinki University of Technology (HUT) in 1985. He developed biomagnetic theory and technology in the Low Temperature Laboratory of HUT (1978–85 and 1987–93) and at New York University (1985–87). Many of his inventions and methods of magnetoencephalography (MEG) were commercially exploited by the HUT startup company Neuromag Ltd. (now part of Elekta Ltd.). From 1993 until 2003 he was the head of the BioMag Laboratory at Helsinki University Hospital. Dr. Ilmoniemi is founder and former CEO of Nexstim Ltd. (NXTMH:FH), a company that introduced navigated transcranial magnetic stimulation (TMS) and the combined use of TMS and EEG. Since 2006, he has been professor of Applied Physics at Aalto University; he is member of the Finnish Academy of Science and Letters and member of the Finnish Academy of Technical Sciences. Currently, he is developing, among other things, hybrid MEG magnetic resonance imaging (MEG-MRI) technology, new methods for TMS as well as solutions to the biomagnetic inverse problem. He is also pursuing work in fundamental and clinical neuroscience; he has taught the course Structure and Operation of the Human Brain since 1989. Ilmoniemi’s 250 publications have been cited over 20,000 times. He is inventor or co-inventor in 11patents. 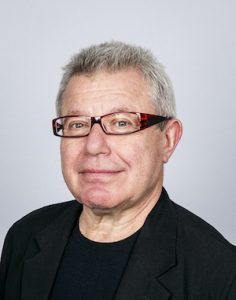 An international figure in architecture and urban design, the architect Daniel Libeskind is renowned for his ability to evoke cultural memory in buildings of equilibrium-defying contemporaneity. Informed by a deep commitment to music, philosophy, and literature, Mr. Libeskind aims to create architecture that is resonant, original, and sustainable. Born in Lód’z, Poland, in 1946, Mr. Libeskind immigrated to the United States as a teenager.

Daniel Libeskind established his architectural studio in Berlin, Germany, in 1989 after winning the competition to build the Jewish Museum in Berlin. In February 2003, Studio Libeskind moved its headquarters from Berlin to New York City when Daniel Libeskind was selected as the master planner for the World Trade Center redevelopment. Daniel Libeskind’s practice is involved in designing and realizing a diverse array of urban, cultural and commercial projects internationally. The Studio has completed buildings that range from museums and concert halls to convention centers, university buildings, hotels, shopping centers and residential towers. 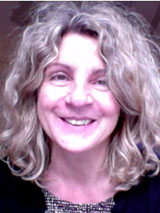 Clara Mavellia from Milan was granted her doctorate at the Freie Universität in Berlin, where she has been working as an academic and journalist ever since. From September 2005 to April 2008 she commuted between Berlin and Munich to attend the interdisciplinary executive M.A. in Philosophy, Politics and Economics (PPE) at Ludwig-Maximilians-Universität. To promote an interaction between Philosophy and Economy, Ethics and Business she founded on March 2010 the Cultural Entrepreneurship Institute. The Cultural Entrepreneurship Institute in Berlin disseminates information about applying ethical principles to practical life and encourages interplay between ethics and business. If these ideas are to spread, it is essential that students, trainees and any interested citizens can find out about the theory and the diverse ways it can be put into practice. That is why Clara Mavellia regularly hosts international, interdisciplinary and intersectoral conferences – in recent years at the Freie Universität Berlin, 2013 at the Handelshögskolan in Göteborg and 2014 at the Ludwig-Maximilians-Universität in München. Last year in June she was in Milano (Italy) with the conference: Ethics and Food, under the Patronage of the EXPO Scientific Commitee. Part of her work is to conduct interviews with people – artists, entrepreneurs, academics, journalists, politicians, etc. – who are particularly passionate and competent in their commitment. This is something the audience finds especially motivating.

Since its foundation, the Institute for Cultural Entrepreneurship has attracted wide support in Germany, Europe and around the world with its ideas and virtual community.

The videos of all events are posted in English, German and Italian on ceberlin, the YouTube Channel of the Cultural Entrepreneurship Institute Berlin.

As the founder of the Cultural Entrepreneurship Institute Clara Mavellia is a consultant for corporates, organizations and institutions seeking to develop a strategy for a sustained economical, ecological, social and ethical foundation. She is much in demand as a keynote speaker. 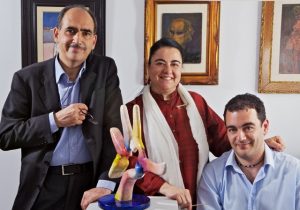 The La Conchiglia publishing house was established in Capri in 1989 and grew up together with the three bookshops with the same name and the Cultural Association set up by Ausilia Veneruso and Riccardo Esposito in those years on the Isle.
The structure of La Conchiglia is that of a small publishing house that mainly deals with specific interests and has a catalogue that in 2015, featured over 350 titles and included authors such as Somerset Maugham, Ivan Bunin, Erri De Luca, Marcel Detienne, Salomon Resnik, James Hillman, Norman Douglas, Axel Munthe, Filippo Tommaso Marinetti, Raffaele La Capria, Edwin Cerio. All these writers share a clear idea of the journey, the isle, the South, and the Mediterranean.
The La Conchiglia Publishing House is driven by a key conviction: while the Isle of Capri, as well as the South and the Mediterranean in general, are exceptional “natural events”, they are also extraordinary “legendary and literary constructions”. Perhaps more than constructions, they can be defined as layers of tales, stories, legends and descriptions. This layering process has left an extremely fertile soil which has fed more stories and legends in a sometimes spontaneous and uncontrolled plethora, also with the creation of hybrids, parasitic outgrowths and detrimental stereotypes. While the landscape of the isle, and of the Mediterranean area in general, is amongst the most man-made, it has also been a cultural human colonization. Human words have changed the perception of the landscape, and the relationship with this land has been filled with symbolic values and meanings differing from culture to culture. Many Mediterranean lands and many islands of this ancient sea have been fed and are still feeding on tales and written words.
The La Conchiglia Publishing House has chosen this name (Seashell) since it recalls one of the strongest universal symbols linked to the sea and its generating and creative abilities.
The logo features a seashell with two mermaids, goddesses linked to the moment of passage between different dimensions and to change, particularly by means of controlled knowledge.
The La Conchiglia Publishing House is and intends to remain a publishing house that deals with specific themes while staying on a specific isle, since “every book is an island. Every island, like every book, is an oracular space and tool, of initiation and passage to different realities. Every book, like every island, is a space and a tool for total seclusion through which total freedoms can be accessed”. 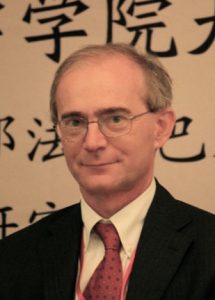 Riccardo Pozzo received his M.A. at Università di Milano in 1983, his Ph.D. at Universität des Saarlandes in 1988, and his Habilitation at Universität Trier in 1995. In 1996 he went to the U.S. to teach German Philosophy at the School of Philosophy of the Catholic University of America. In 2003 he came back to Italy to take up the Chair of the History of Philosophy at the Università di Verona. From 2009 to 2012 he was the Director of the Institute for the European Intellectual Lexicon and History of Ideas of CNR. Beginning 2013 he is the Director of the Department of Humanities and Social Sciences, Cultural Heritage of CNR. Order of Merit of the Federal Republic of Germany on ribbon. He was elected a member of the Institut International de Philosophie. He currently serves as member of the H2020 Programme Committee Configuration Research Infrastructures and of the Scientific Review Group for the Humanities of ESF as well as and chair of the World Congress of Philosophy Beijing 2018 program committee. He has published monographs on the Renaissance (Schwabe, 2012), the Enlightenment (Frommann-Holzboog, 2000), Kant (Akal, 1998; Lang 1989), and Hegel (La Nuova Italia, 1989). He has edited and co-edited the proceedings of the 36th Congresso Italiano di Filosofia (Mimesis, 2009) and recently a miscellany on Kant on the Unconscious (DeGruyter, 2012) as well as volumes on Dilthey and the methodology of the history of ideas (Meiner, 2010; Harrassowitz, 2011; Frommann-Holzboog, 2011), the philosophical academic programs of the German Enlightenment (Frommann-Holzboog 2011), intellectual property (Biblioteca di via Senato, 2005), the impact of Aristotelianism on modern philosophy (CUA-Press 2003), the lecture catalogues of the University of Königsberg (Frommann-Holzboog, 1999), and twentieth-century moral philosophy together with Karl-Otto Apel (Frommann-Holzboog, 1990). He has published in the following journals: Ave Maria Law Review, Archiv für Begriffsgeschichte, American Catholic Philosophical Quarterly, Berichte zur Wissenschaftsgeschichte, Giornale critico della filosofia italiana, Hegel-Jahrbuch, History of Science, History of Universities, Intersezioni, Isis, Jahrbuch für Universitätsgeschichte, Journal of the History of Philosophy, Kant-Studien, Medioevo, Philosophical News, Quaestio,  Review of Metaphysics, Rivista di storia della filosofia, Studi Kantiani, and Topoi. 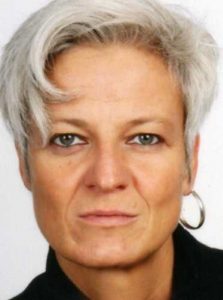 Annette Rupp was born in Hessen – Germany. She studied German Literature, Philosophy and Science of Education in Muenster and Berlin, followed by additional studies of cultural management. At the same time, she became an accomplished musician on the organ and trumpet.
Her professional career took her to the University of the Arts in Berlin, where she taught project management. From 1998 to 2005, she produced 30 documentaries and directed audio books for Ventana Film- und Fernsehproduktionsgesellschaft mbH. From 2005 to 2009 she worked at the headquarters of the Goethe-Institut in Munich, producing audiovisual media. She was appointed director of the Goethe-Institut Los Angeles in September 2009. In February 2012 she became Executive Director of the Villa Aurora in Berlin. 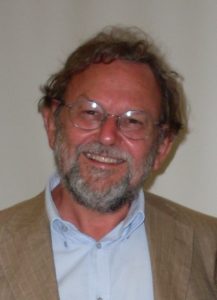 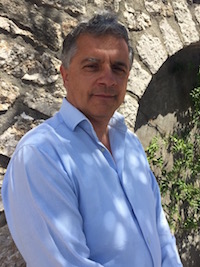 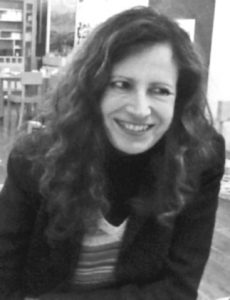 Paola Del Vescovo is Professor of Painting Restoration at the Fine Arts Academy in Naples. She taught Painting Techniques from 2008 to 2011 as a visiting professor at the Universität der Kunste, Berlin. After completing her studies at the Higher School for Conservation and Restoration in Rome and of Art History at the “La Sapienza” University in Rome, she worked on major restoration projects, in partnership with private and public institutions in Italy and abroad. The topics of her publications include the issue of the origin of oil painting and the themes of restoring contemporary art.
In the last twenty years she has also been a painter, exhibiting frequently in Italy and Germany.