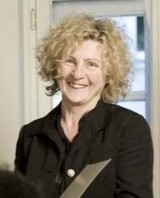 Clara Mavellia originates from Milan (Italy). She received her doctorate at the Freie Universität in Berlin, where she has been working as an academic and journalist ever since.

From September 2005 to April 2008, she commuted between Berlin and Munich to attend the interdisciplinary executive M.A. in Philosophy, Politics and Economics (PPE) at Ludwig-Maximilians-Universität.

In March 2010, she founded the Cultural Entrepreneurship Institute in Berlin in order to promote interaction between philosophy and economics, between ethics and business.

As a philosopher and economist, I firmly believe that humanism and ethics should play a much greater role in the economy, and that they are perfectly in tune with commercial logic.

However, I realised that much of the specialised knowledge about ethical economics and how it is applied in everyday practice is confined to conferences and often pigeonholed in individual disciplines. If we want to raise the awareness of (above all) youngsters for these issues and encourage people to take on responsibility for future generations, it is crucial for these insights to spread beyond the boundaries of academic communities. To me, ethics is an inexhaustible resource that has enduring benefits to offer society and the environment for generations to come. If these ideas are to be implemented adequately and sustainably, students, entrepreneurs and of course ordinary citizens everywhere must be enabled to deepen their understanding of these matters.
That is why I founded the Cultural Entrepreneurship Institute in Berlin in March 2010, seeking to pursue interactions between philosophy and economics, between ethics and business.

The events bring together reputed academics, exemplary entrepreneurs, and committed men and women from different disciplines and business sectors. The aim is to promote intersection and interaction among people, values and skills – see the Medici effect and Leonardo da Vinci – Art – Science – Enterprise.
Our videos of these conferences and of interviews with international figures who set us all an example with their commitment, competence and passion are available in three languages with the aid of interpreters, and are available online free of charge on ceberlin, the YouTube channel of the Cultural Entrepreneurship Institute.

These days, thanks to technology and social media, we are all more closely connected, and this is generating collective interdependences, exponential growth and both global and artificial intelligence.

For example the automatisation creates software and robots for the repetitive and monotonous work: this together with basic income leads to human beings unfolding the potential talents and realizing a modern renaissance.

The challenge now is to tap into our global cognitive skills with a sense of responsibility, care and humour, allowing us to frame a good life for ourselves and for future generations and trigger a global renaissance in a peaceful, free and fair world. It is the only way to create economic, environmental and emotional prosperity.